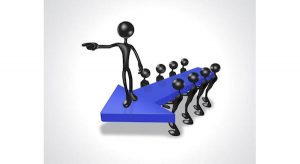 Marketing illuminates the path to solving a problem. Not just any path – your path. This is somewhat academic in low-consideration consumer products, but lifeblood to high-consideration B2B products and services. To get these prospects to follow your path, you must lead.

These high-consideration products and services are often are mission- and career-critical and so there is an element of trust that sits on prospects’ shoulders during the consideration journey. To earn that trust you must do more than mark the trail with colored stones and leave treats along the way. Demonstrate authority, leadership, and humanity to prove your competitive advantage is differentiating. It gives prospects a strong reason to believe.

Teach them to fish: 5 qualities of B2B prospecting leadership

1.    Humanity. The B2B marketing leader takes the time to understand prospects as both executives and people, with both personal and corporate goals and responsibilities, which sometimes conflict. The prospect persona process provides remarkable insight, and how these individuals come together to make a decision. This quality is essential. Recognizing and embracing humanity leads to empathy, which is the basis of all effective communication. Everything starts here. Or stops.

2.    Honesty. “Speak”, whether in print or in person, with ethics, morality, and a crystal clear vision of what is and what isn’t. A key component of honesty is respect for your prospects and their corporate culture. Don’t embellish your capabilities or denigrate the competition. Lay out, in terminology that prospects can understand, how your product or service can address their concerns, that success is a journey and not a slam dunk, and how you, as a leader, can bring a value add.

3.    Commitment. It is critically important that your prospect knows that you are committed to their success, and not just to selling your product. Your commitment to the marketplace emits the confidence that your solution is not just viable, but superlative. Let your prospects see you with your sleeves rolled up and your fingernails dirty. Admit problems and setbacks, and if an aspect is particularly gnarly, fess up. Bring your team of leaders into the conversation.

4.    Partnership. You are here for the long-haul, and provide the tools and insights necessary for success, which may include ongoing training, troubleshooting, and the instillation of positive energy. The consideration journey is rarely straight and narrow. Put your arm around your prospect. Show authority and guidance. Use creativity, and sometimes humor, to make your point.

5.    Measurement. Your prospect is very serious about the steps they must take and the answers they must find while considering potential solutions. A leader must understand how the prospect measures success, and configures their own measurement system to coincide and complement. It may be uncomfortable but it communicates seriousness, underscores the other qualities. and provides the basis for continuous improvement.

Moving from reactive to proactive leadership.

We are all aware of the conclusion of various studies that the “sales process” is disappearing. Depending on which study you reference, about 60% – 70% of the consideration process takes place prior to engagement with the selling entity. Placidly accepting these results breeds reactive positioning. They don’t want to talk with our reps, so we can hide behind the curtain. That is the definition of a self-fulfilling prophesy.

Once you take the first step with the prospect persona process you are on your own road to leadership, which by definition is proactive. Which not only gives prospects a reason to believe, it gives them a reason to engage.

I took a few minutes and googled Customer Service, and here are some of the definitions I found:

Customer service is the process of ensuring customer satisfaction with a product or service. (Investopedia)

Getting customer interactions right has never been more important, especially since social media has given unhappy customers a louder voice. (HBR)

Makes sense and I’m going to assume we all agree with the above statements. However, in practice, customer service is an area that can be taken for granted, overlooked, or considered a cost center and treated as such.

Death by a thousand cuts.

Here is a sad story of bizarro customer service actively undermining brand and customer satisfaction while wildly inflating the cost of delivery. I do not believe that lightning struck me, that I am the exception.

I have had a subscription to my hometown newspaper for about 30 years (and my hometown is among the largest on the planet). I decided to become a digital subscriber when the most recent cost of delivery was subtracted from my credit card. I called the same day and was assured that the switch to digital was immediate, that my checking account would be charged for the digital subscription and the home delivery charge would be refunded.

The next day I looked at my online statement and the new charge was there, but not the refund.

I saw this play.

I completed the email form on their website. The form said it would take 2 – 3 days to get a response. Sure enough, on the 3rd day I got an email that said it takes 10 – 14 business days to get a refund and that there was no way to make it happen quicker. Included was a GIF of an iron door clanging shut.

On the 15th business day I called to inquire about my refund. I spoke to a supervisor who told me that the refund had been transferred to my account several days ago, but it would not appear on my online statement, that I should call my bank.

On the 17th business day I received a paper check in the mail.

Since we started with definitions, let’s go to bizarro, which I believe was first introduced in Superman comics:

The opposite of the real world. Good is evil, round is square, hello is goodbye. (Urban Dictionary)

Up really should be up.

Many large organizations embrace the moment of customer interaction as a way to burnish their brand, to create happier customers that stay longer and buy more. There are others who do not, and this is one.

What’s the harm in having a supervisor authorize a clearly justified refund on the spot? Was this worth the expense?

The story above is chaotic and self-destructive. No company would knowingly design such a system. Fixing it begins by viewing customer service through the eyes of profit, not as a cost center.

Should I stay or should I go.

When the call ends these CSRs say, Thanks for being the best part of the (name of the publication). What a bunch of hooey. Check clears and I’m gone. It’s a perfect storm Everyone loses.

LATEST FROM THE BLOG

There’s no app for this

How do you keep your brand relevant during these tough times? Here’s clue #1 – this is not a selling opportunity. My advice is all in this one word – empathy. Be open and out there, engage with your customers as humans. Do more listening than talking. Inread more

Please opt-in to our budding community.

It starts with blogs and a newsletter, opinion, and research, and conversation.

It includes an open invitation to get me to weigh in on an issue you’re wrestling with – together we’ll pin it to the mat.